Delhi is used to star power — it’s not quite Bombay and Bollywood, but there is always some pretentious VIP movement, a minister spotted at a dinner or some son-in-law at a page 3 party. Even though name-throwing is vintage Delhi, the last 48 hours have certainly given ‘star-struck’ a whole new meaning!

Boxer Vijendra Singh channelized his inner Manny Pacquiao and stepped out of the ring to become the Congress candidate from South Delhi, former cricketer Gautam Gambhir — after his Twitter spat with Omar Abdullah and Mehbooba Mufti — could have been mistaken as a BJP candidate from Kashmir, but he swung it only as far as East Delhi while Punjabi music superstar Daler Mehndi sang his way into the saffron party as well. He could be your next MP. Yes, of course, Delhi is star-struck. (Photo: India Today)

The newest BJP recruit, the gentle giant, Sunny Deol, was introduced by the defense minister Nirmala Sitharaman herself. Of course, Twitter though thought after movies like Border and Gadar, he was good enough to be a defense minister himself! (Imagine what they must think about Vicky Kaushal).

Nirmala Sitharaman may have nearly jinxed her own job by saying someone who could play the role Sunny did in Border would only harbor feelings of nationalism while Piyush Goel was emphatic — that was no acting, he said. Hopefully, Sunny’s dancing skills will not be any reflection on his political career! Not so Gambhir? Name-dropping is ingrained in Delhi’s culture. Of course, political parties will have to field celebrities. (Gautam Gambhir photo: Twitter)

It will be interesting though to see how Sunny takes to the campaign trail now. No one contradicts his public persona more than the actor who is notoriously shy — and if the voter thinks every second line will be peppered by his famous ‘yeh dhai kilo ka haath’, they may just be asking for a refund!

As an aside, what’s sauce for the goose is sauce for the gander — dynasty is alive and kicking across parties. Sunny is the third family member from the Deols to join the BJP.

Some more last-minute dhamaka and this time sitting MP in North West Delhi, Udit Raj, has been replaced by Punjabi folk and Sufi singer Hans Raj Hans. Hans has earlier charmed many parties, literally and otherwise. From Akali Dal to Congress, there isn’t much choice left after this! Udit Raj, meanwhile, has already joined the Congress — the cards are constantly shuffling. And there are always many jokers in the pack. 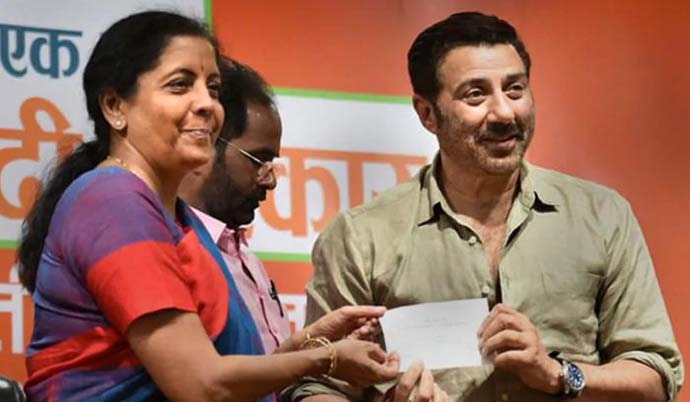 Is there no politician fighting in Delhi, you say?

There is one but it would have been better if she wasn’t. Three-time former Delhi Chief Minister Sheila Dikshit, at 81, is the Congress candidate against Tiwari. No wonder ‘youth leaders’ is such a misnomer in the Congress. Relatively speaking then, Ajay Maken remains one.

Shifting to Mumbai North, the rangeela safar continues — Urmila Matondkar has reportedly taken to her role as a Congress candidate like ‘a duck to water’, at least that’s what they are saying.

They must have said the same when Govinda campaigned all those years ago.

To quote Shakespeare, ‘all the world’s a stage’.

The moment you wonder where the actual politicians of Delhi have gone… (Photo: India Today)

If Hema Malini perched by herself wasn’t enough, Jaya Prada’s sting on Azam Khan about his ‘X-ray eyes’ will scare even those buffaloes! The circus is on and the performers have a 5-year contract.

Very few like Jayalalitha, her mentor MGR or NTR over the last decades have transitioned to mainstream politics and remained resilient in that profession — in 2014, 22 actors contested, only 12 made it. How many of these celebrity candidates will be repeat offenders, oops, defenders?

In South India, especially in Tamil Nadu, voters seem to accept much more easily than their stars can carry their hopes and aspirations from celluloid to reality. After the Jaya and Karunanidhi vacuum, Kamal Haasan may have started his own party, but both his and Rajinikanth’s politics are in a nascent stage.

Although, let’s be honest, the day Thalaiva contests, the question will be — by how many votes.

The one who has actually taken the plunge is veteran actor Prakash Raj who is contesting as an independent from Bengaluru Central, saying he is giving a voice to the disillusionment against both the national parties.

But in the North and West, it’s a lot more superficial. To borrow a Bollywood dialogue, ‘tum jaise kitne aye aur kitne gaye’.

Amitabh Bachchan, Vinod Khanna (Sunny will contest from Khanna’s constituency Gurdaspur in Punjab), Congressman Shatrughan Sinha (who is also supporting his wife Poonam, a Samajwadi Party candidate) — from megastars to desperate survivors, the list is endless. And we haven’t even touched on those who are nominated to the Rajya Sabha, like Rekha who gave Bappi Lahiri a run for his gold. That’s another silsila for a post-election day! It is obvious why political parties are fascinated by celebrities. They make perfect business sense for short-term goals. They are a novelty, a spark that lights up the beaten track. Also, they are not, in a majority of cases, a political threat to any of the leaders. Maybe the insecurity is more amongst North Indian politician — which is why they don’t really encourage any serious intent.

Sunil Dutt was amongst the most successful, a 5-time MP who also became an MoS, Rajesh Khanna lost narrowly to Advani from the New Delhi seat and even Mahabharata’s Krishna, Nitish Bhardwaj cashed in on his celestial role but he could only win one election. Par picture abhi baaki hai, there were never so many actors desperate to jump ship. Is this the new retirement plan for the likes of Kirron Kher and Moon Moon Sen? It seems to be a trend — much like winners of beauty pageants plunging straight into Bollywood.

If anything comes close to the glamour of Bollywood, then it is sports. Political parties are leveraging on that popularity — Vijendra Singh, Gautam Gambhir are no trailblazers in this field, thankfully for once, we have a Sports Minister who has actually played a sport.

This time around, Rajyawardhan Rathore, an Olympic silver medallist, will take on Krishna Poonia in Jaipur Rural. Poonia is a Commonwealth gold medallist in Discus Throw. There are many others hovering around but none on as much of a sticky wicket as former cricketer Navjot Sidhu. If one has to choose, Twitter’s latest trend — ‘Mahi for PM’ — does have a good ring to it and if Rakhi Sawant can campaign with a Gandhi topi atop her, then, well, never say never to nothing!

So, do celebrities make good politicians? Definitely not as good as politicians make actors!

The Prime Minister’s selfie with a host of Bollywood stars may have given them ideas, but the reality is, they are only expected to perform. Starting from the big man Amitabh Bachchan himself, our film industry has seldom taken a stand on anything controversial. So, you get what you deserve.

And now, quite honestly with Akshay Kumar’s ‘interview’ of the Prime Minister, even Koffee with Karan is beginning to sound like a hard-hitting desi Anderson Cooper 360.

This was first published in DailyO        Compiled by Shams Ahmad