Editorial
Share
Accustomed either to isolation or global dominance, the US has in recent years been playing the third role. Ever since its power diminished following the 2008 meltdown, it finds itself running around to block political forces which are ascendant everywhere almost independent of its authority.
Brexit happened despite the US. The country itself has a President it did not want. And now, the weight of its establishment is behind the centrist banker, Emmanuel Macron in France. But will that suffice to keep the ultranationalist Marine Le Pen at bay? The falcon cannot see the falconer.
Electoral eruptions are taking place everywhere almost in defiance of American will. In some instances, it is difficult to fathom what possible interest the US might have had a certain outcome until the truth suddenly leaps out of the thicket, in a sharp silhouette.
Why, for instances, would the CIA exert every muscle to support the Right Wing Guillermo Lasso in Ecuador, a country of 16 million people? In the event, a rank Leftist with a menacing name, Lenin Moreno, won.
World Affairs these days are sometimes like a game of billiards. That roughly is the effect of Lenin Moreno’s victory in Quito. The consequence of this outcome is that Julian Assange, who controls the nightmare called Wiki leaks, now cannot be dispatched to Sweden for trial. He can live for the next few years in the comfort of the Ecuador Embassy in London. That clearly is an affront to the US establishment.
Worse maybe on its way in Mexico, Monroe doctrine or no Monroe doctrine. Come to the 2018 elections, President Enrique Nieto will by all accounts be hit for a six, to be replaced by Leftist Lopez Obrador, if not something more radical. “Building the wall” rhetoric is not the only humiliation that has registered with the Mexican electorate.
So, scramble CIA; reversal in Mexico has to be averted at all costs just as one has to be speeded up in Venezuela.
You may sail the world’s most powerful Armada to threaten Kim Jung-un, but every school boy in Seoul knows that US troops in Panmunjom and at nearby Okinawa Island would be exposed to even hand carried ordnance in the unlikely event of hostilities.
Then why all this bluster on the part of Secretary of State Rex Tillerson, Vice President Mike Pence and President Trump himself? The US has patronized many corrupt regimes in Seoul, but the disgrace in which President Park Geun-Hye had to leave office has left South Koreans shattered. Is the US influence with the regime that comes in after May 9 elections about to plummet?
Is all this muscle flexing, then mixing hot and cold (Trump says he would meet Kim Jong-un), designed to somehow psyche Korean voting intentions. South Korea is not exempt from anti-Americanism. An outcome conditioned by this factor will clearly be advantageous to China and Russia. 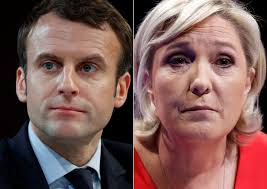 The global establishment is at sixes and sevens on which way the cookie might crumble in France. At the outset Macron seemed a clever idea, responding to the universal quest for something new, different from the established parties. But as the date of elections approaches, the idea begins to look too clever by half.
A 39-year-old, married to a grandmother, branches out with his own party, En Marche, or March Ahead has considerable novelty attached to it. But on close scrutiny, he is a Rothschild banker, a former member of the most unpopular Francois Hollande government. Establishment to the core. Old wine in new bottle. Le Pen tattooed him with punches on that count in the TV debate the other night.
Suddenly imagination transports me to that Dumbo Loft under the Brooklyn Bridge on the evening of November 8. Hillary Clinton was the front-runner. It was an impressive assembly of World bankers, State Department officials, artists, journalists, friends Saeed Raza and Nusrat Durrani from Lucknow (to underscore my parochialism), all eager to celebrate a Clinton victory. But we all know what happened. (for the rest of the drama read my November 10, blog.)
Does Macron’s fate on election day resemble Clinton’s? American establishment shows traces of Joseph McCarthy in its DNA at the sight of anything resembling the classical left. Comfort level with a Bertolt Brecht and Arthur Miller is confined to Broadway shows. Little wonder, Bernie Sanders was grounded by the Democratic Establishment when he was miles ahead in the race.
In the French campaign, the communist Jean-Luc Melenchon surged with lightening speed, but French public was witness to his brilliant presentation only towards the end of the campaign. Imagine where he might have been had a viscerally anti-Left media placed the spotlight on him earlier. Even so, he got 20 percent of the first round votes as against Le Pen’s 21 and Macron’s 23 percent.
All sorts of calculations are afoot: if 90 percent of Le Pen’s supporter turned out but only 65 of Macrons were mobilized, she would win.
The trophy for prescience on the US elections clearly belonged to the filmmaker Michael Moore:
“This election is only about who gets who out to vote, who gets the most rabid supporters, the mind of a candidate who gets people out of bed at 5.00 am on Election Day.” 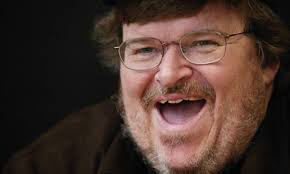 Moore added: “So many people have given up on the system because the system has given up on them. They know it is all bullshit: politics, politicians, elections. People want to tear down establishments.” And Macron sadly is “the” establishment in very thin disguise.
In an insightful piece, Ross Douthat wrote in the New York Times, that Le Pen has with great deliberation distanced herself from the anti-Semitism of her father Jean-Marie Le Pen. This brings her closer to the middle.
According to Douthat, “Nobody seriously doubts Le Pen’s competence, her command of policy, her ability to serve as President without turning the office into a Reality – TV Thunderdome.” Trump’s inability to master his own turbulent emotions is not an issue with his Gallic counterpart.
In the US, the media (except Fox News) threw its total weight behind Clinton. It had egg on its face. The French media, likewise, is supporting Macron to the hilt. In our perverse times, is that not a good omen for Le Pen?