William Wordsworth, who was in France for quite a long time during the 1790s, penned his fascination with the French Revolution through the following words:

“Bliss was it in that dawn to be alive,

But to be young was very heaven!”

Our fascination with youth has much to do with the idea of fresh beginnings and infinite possibilities — of uncharted territories to be explored, of hope, snatched back from the cold ashes of cynicism that come with old age. Through them, the world breathes anew. The poet Rabindranath Tagore wrote rapturously of a “green, new, and raw” young generation dancing in abandonment in one of his memorable poems. Not all the greats agree, however. Plato wrote in The Republic, “It is for the elder man to rule and for the younger to submit.”

In India, gerontocracy — the rule of the old — has been the general norm since independence, notwithstanding the fact that several of our freedom fighters who gave their blood were very young, indeed some teenagers. According to the 2011 Indian Census, the average Indian is 25 years old while his/her average legislative representative is about 40 years older — at a venerable 65. The average age of MPs has increased from 46.5 years during the first Lok Sabha (1952) to 56 years in the 16th Lok Sabha (2014 to present). While the first Lok Sabha had 489 MPs, the current Lok Sabha has 545 MPs. The current Lok Sabha is the second oldest house of independent India — the first was the previous Lok Sabha (15th).

We see the usage of the term “young Turks” a lot whenever some relatively younger leader comes to centre-stage, but what does it mean? In Turkey, The Young Turk Revolution of July 1908 reversed the suspension of the Ottoman Parliament by Sultan the Abdul Hamid II, who abdicated, marking the return to a Constitutional government. The Young Turk movement brought together various intellectuals and dissidents, many living in exile, and officers in the army. The Revolution restored Parliament, which had been suspended by the Sultan in 1878.

Thus, the term “young Turk” came to be used generally to denote a member of an insurgent group within an organisation (often, although not always, a political party) advocating change — sometimes radical change — in that organisation.

How does this apply in India? 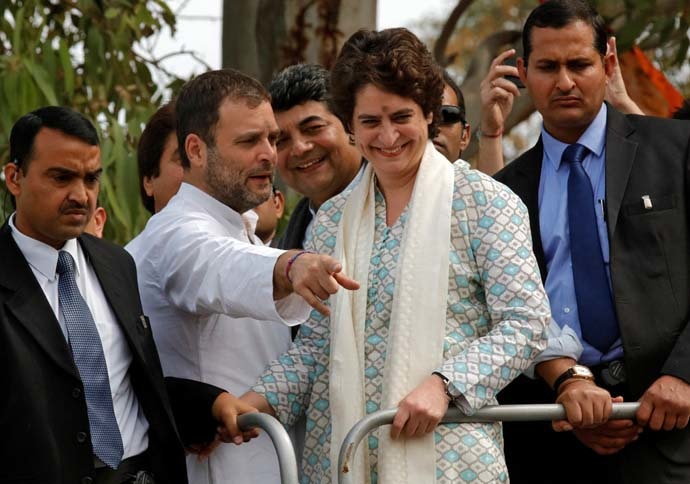 Politics is a family business and a lucrative one at that. So then, let’s not call them ‘Young Turks.’ (Source: Reuters)

Now, the question is, if a young person like, say, Tejaswi Yadav or Akhilesh Yadav, Pankaja Munde or MK Stalin, Jyotiradatya Scindia, Sachin Pilot, Kanimozhi, or even a not-so-young Rahul or Priyanka Gandhi rises in the party, is he/she a young Turk in the true sense of the term?

Every one of the names mentioned comes from a position of privilege and the word “dynasty” that the BJP uses applies to them — and to the BJP too, since there is a huge list of names one can come up with in that regard. Politics is a family business — and a lucrative one. In spite of everything — and that’s a pretty big “everything” — that should be hyperlinked to the numerous failures of the Modi government, its prevarications, desperate attempts to sweep things under the carpet, U-turns, bizarre excuses et al, even those not-so-hardened bhakts who would admit to all this reluctantly would still say that Modi is, after all, not from any dynasty. He is a single person, without any children and has no fish to fry for the next generation of Modis.

That is the major clincher in the Rahul vs Modi debate even after all the facts, numbers and fact checking have stampeded twice around the room and made an exit.

Rahul may be young (again relatively speaking) but he is “ancien regime”. Which is as old as you can possibly get as far as Indians are concerned.

Modi, in his aspirational speeches and dreams that he purveys, is actually more saleable to our jobless frustrated youth because of his supposed plebian past. Various interviews of young people across the country attest to this.

Unlike the Congress, which is seen as a party of old people firmly clutching to the reins — and this was much evident when, say, a controversial Kamal Nath was made CM of Madhya Pradesh, even after much public outcry —  the BJP, on the other hand, is seen to be growing younger. The number of BJP MPs in the current Lok Sabha above the age of 70 declined to 8.8 % — from 14.2% in the 15th Lok Sabha — and MPs aged 25 to 40 increased from 5.8% to 7.8%, according to an IndiaSpend analysis of data released by PRS Legislative Research.

The trend in the opposition Congress is the exact reverse of the BJP — the younger lot of MPs declined from 8.1% to 6.7%, and older MPs increased from 11.9% to 20%. Apparently, there is a voluntary unwritten 75-year age limit rule of the BJP. In that case, both LK Advani and Murli Manohar Joshi, presently sunning themselves on the porch of the Margdarshak Mandal, should be well aware of the rule, and we should not be making anything of Advani’s recent blog reminding his party about democracy and dissent, as some kind of resentful backlash.

The two young Turks currently in the news — who actually qualify for that epithet — having neither dynasty, nor privilege like the aforementioned names are Tejaswi Surya and Kanhaiya Kumar.

Tejaswi Surya practically lives up to his name if one sees him performing in public. The blazing sun. The energy pouring out of his being, his voice full of candour, earnest and frank. Perhaps that is how his fans see him. He is the BJP’s Anointed One, the wunderkind, that some say might be Modi’s successor. Tejasvi has proven his mettle, first as a leader for the ABVP (the student wing of the BJP), the BJYM (the youth wing of the BJP), as a spokesperson for the party, and as a columnist. He also happens to be a lawyer by qualification and profession. In 1996, when the late HN Ananth Kumar contested from Bangalore South for the first time, he was still a novice. He was 37 years old, which is quite young by Indian political standards, and he was taking on Varalakshmi Gundu Rao, the wife of the previous MP of Bangalore South and former Chief Minister of Karnataka, late R Gundu Rao.

Ananth Kumar was not only young and taking on a powerful candidate — but he was also from Hubballi and new to Bengaluru. Despite this, he went on to win the election and remained undefeated throughout his career. In the then-young Ananth Kumar — the stalwarts of the BJP, Atal Bihari Vajpayee and Lal Krishna Advani — saw a potential leader and Ananth proved them right by not just winning elections on a regular basis, but also by becoming a superb leader. He performed admirably in whatever role given to him. V for Victory: But if citizens’ right to ask questions gets circumscribed, whose victory is it anyway? (Source: PTI)

Tejasvi is being groomed for the future and the current leadership sees him as suited for the future, which is why he has been surprisingly picked as the candidate ahead of the hugely popular Mrs Tejaswini Ananth Kumar to contest from Bangalore South.

Yet, what does he say that is so radical? That would make us all sit up? Nothing at all.

Some old tweets that the media went to town over, followed by an OMG! Tweet that he couldn’t believe his luck at being chosen by the BJP High Command, then reportedly the stentorian assertion that whosoever went against Modi or questioned the present government was an anti-national.

If one’s mental outlook is conservative and orthodox, one is not youthful in any sense merely by being young in body.

In this election, more than ever, it is crucial for parties to find a connect with first-time voters. First-time voters are often better informed, more tech-savvy and cosmopolitan than the seniors of their family, and can potentially break moulds where their family’s established political convictions are concerned. They also weigh in significantly on elections by acting as opinion-makers and influencers in their social circles — to ask citizens not to question or critique the establishment is essentially taking away their agency. It is making them apolitical which is to the advantage of politicians. This is exactly the status quo position that, to my mind, Tejaswi seems to be taking. To make any difference in public life, the youth must realise that everything is political and that is why we can’t be apolitical. They must understand the nature of the political process in a modern democratic state. And equally importantly, the essential difference between procedural democracy and participative democracy.

Even LK Advani, advanced in his years, made this point in his blog recently when he expressed alarm and commented that opposition and critique should not be stifled in a democracy.

Meanwhile, here is an excerpt from Kanhaiya Kumar’s speech at Azad Maidan on 3rd March 2016. It is to my mind, probably the aptest benchmark of what a “Young Turk” should be like: Having neither dynasty, nor privilege, Kanhaiya Kumar qualifies for that epithet, a ‘young Turk’. (Source: PTI)

They were saying on one side soldiers are dying. I want to salute them for their service. A BJP MP in Parliament said that ‘jawans are dying on the border’. I want to ask you. Is your brother there? In this country, crores of farmers who are dying. The ones who grow wheat for us and the soldiers. What do you say to them? The farmers who work in the fields, my father. My brother is in the army, and he dies there. Do not try to separate the constable, the farmer, the soldier, poor people like me, by creating distorted binaries. I salute the soldiers but have you ever thought of their families, the families of farmers who are forced to commit suicide?”

Or take Atishi Marlena of the AAP as an example. What a contrast to “Chowkidar” Gautam Gambhir. In a tweet on February 14, 2019, he said, “Yes, let’s talk with the separatists. Yes, let’s talk with Pakistan. But this time conversation can’t be on the table, it has to be in a battleground…”, falling neatly in line with the sabre-rattling of the party he was to join a month later. For Atishi Marlena, a Rhodes scholar and alumni of Oxford University, the primary concerns are the education and health sector — and that is what she forefronts in her election campaign. 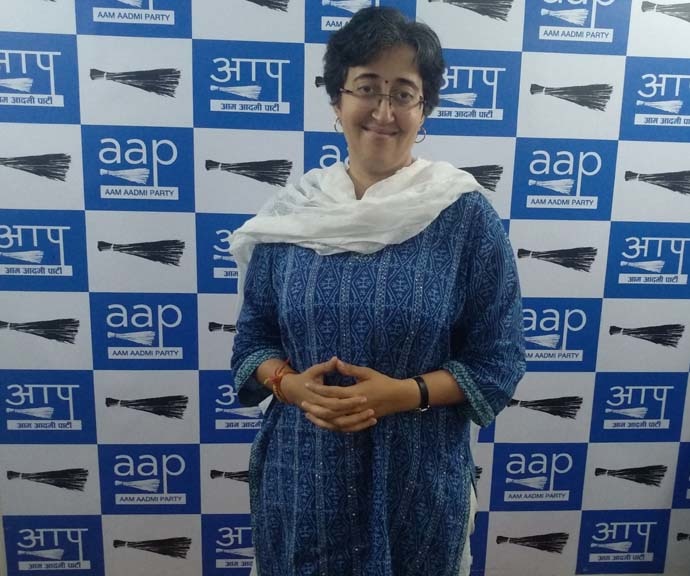 For AAP’s Atishi, the primary concerns are education and health. Not muscular nationalism or denying rights. (Source: DailyO)

Youth has been enthusiastically cooperative with the BJP, or, to be more precise, PM Narendra Modi, in extraordinary ways, from Bollywood stars to cricket stars pitching in with supportive statements, tweets, selfies, and in the latest instance, an exclusive “non-political” interview of the PM by movie star Akshay Kumar with the usual fawning questions. But what manner of youthfulness is this that exults in conservatism and conformism? What kind of youth follows a “Simon says” directive and promptly adds “Chowkidar” in front of their names obediently without genuflection?

Youth by virtue of lesser age alone does not by default become progressive, as many of us fondly and naively believe.

In many ways, this generation is far less intrepid and idealistic than their counterparts even a generation ago.

The glamorous role models and “influencers” that political parties shove before them to extract votes may be young — but in their opportunism, cynicism and apathy, they are worldly-wise and ancient.

This is one of the saddest truths that has unfolded in the current Lok Sabha elections. Mamata accuses BJP of being anti-Bengali, asks if hilsa, sandesh will be ‘branded ‘infiltrators’